Is Fighting Bad? NO! 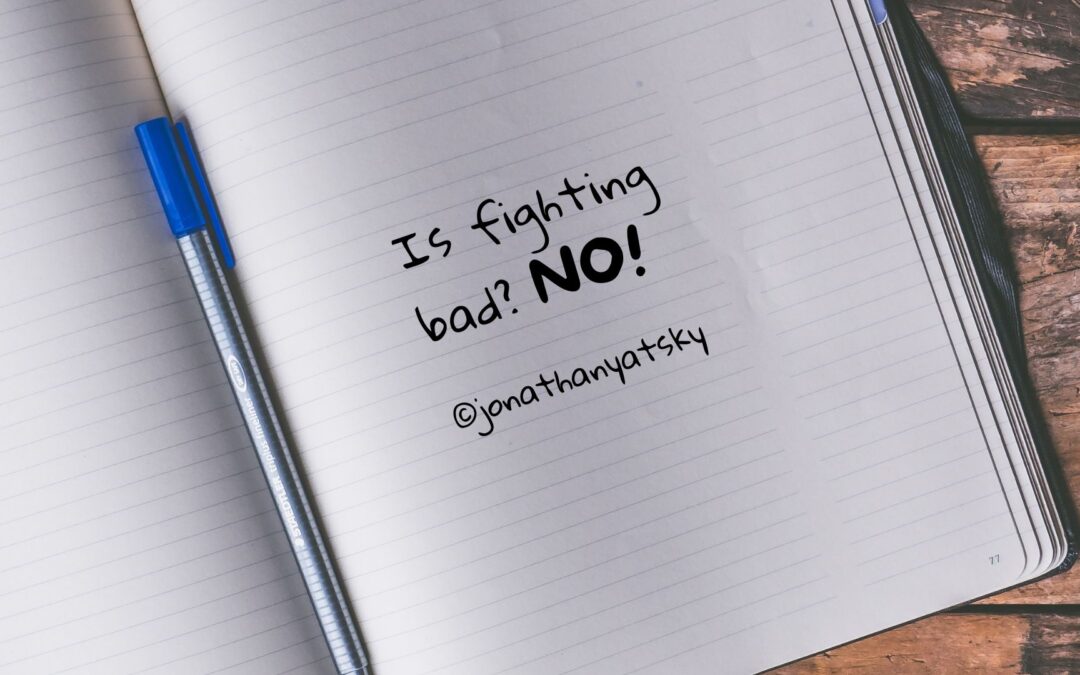 Ding ding, ding, everyone gather round, the bell has rung, and it’s time for a fight! Our fighters have taken their sides, their defenses are up, and they are ready to rumble!

But seriously folks, if only the fights in your relationship were as entertaining!

If you and your partner fight, don’t worry. I have tips to help you not only get through the fight but also become stronger on the other side.

So today’s question: Is Fighting bad? Answer: NO! (gasp!)

Fighting is a part of EVERY relationship. If you don’t ever fight that means you’re not actually sharing deeply with each other. Healthy relationships need deep conversations.

Fights happen because we are all individuals, we have our own thoughts, and we sometimes just don’t agree!

Despite popular belief, it is not a bad thing to argue with your partner. It’s actually how you argue with one another that matters.

If you are fighting in a constructive way, you’re fighting for something that you want to see differently. Your goal is to come together stronger at the end, even if the journey is uncomfortable.

If something in your relationship is not working, have a spirited discussion about it with the express purpose of getting to the other side, finding a compromise, or a new way forward.

On the other hand, if you are fighting in a destructive way, your goal is to win at all costs, and you will pretty much do whatever it takes.

There are no rules and certainly no consideration for the other person, which means they become your opponent. At the end of these arguments, the battlefield looks like a bomb went off, and there are casualties on both sides. These are the kinds of arguments that break relationships.

So let’s break down two unhealthy fighting habits and two healthy ones so that you can learn to fight and grow stronger together.

We all have certain traumas, upsets, and bad memories. These are like big red trigger buttons. If you press one of your partner’s buttons, you are likely to get a big reaction.

If you bring up their regrets, mistakes, and reminders of their failings and throw them in their face during a fight, it is likely to be very destructive.  I know that sometimes when you are upset, bringing up the past may seem like the “right option,” but trust me, it isn’t.

Oh boy, I don’t think anyone on the planet enjoys not feeling heard, especially during a fight. The problem is that in the heat of battle, you might not care!

You’ll start interrupting, shouting over your significant other, and be so focused on getting your own point across that you just make it worse.

Remember, your partner will remember the actions you take during a fight even after the fight is over, so don’t say things you WILL regret later.

2 ways to have a CONSTRUCTIVE argument:

Setting ground rules that you both agree to dramatically improves the outcome of a fight.

Ground rule examples: no interrupting, talking timers, talking sticks, notepads for writing down the things you wanna say when it’s not your turn, and “no go topics”; these are some good ways to plan for success.

Sticking to ground rules during an argument requires a certain amount of self-control, so if you find your emotions are running a little too hot, take a moment and go release them. Only come back when you have cooled off.

Having these agreements can make all the difference, especially when you both respect the rules you’ve created together.

2. Be willing to find a solution.

Think about what I just said. Be WILLING to find a solution.

Being willing means taking enough steps back from the situation that you can consider other possibilities. It doesn’t mean you will end up agreeing with those solutions, but you can at least talk about them.

Now, you may be thinking, “What if this is something that I can’t compromise on?” That is a fair question!

If that’s the case, I want you to consider that there are always hills we’re willing to “die” on. Things that are so important to us that we cannot and will not change how we feel about them.

If that’s the case in this particular argument, it is okay to choose this moment to stand your ground. Just remember you can’t do this with everything, you can’t die on EVERY hill, or you won’t have this relationship.

And, remember, most arguments can be resolved with compromise.

One final thing to keep in mind when it comes to fighting, and I know I say this a lot, but:

If you have a fight, and you agree on a course of action, make sure you DO THAT THING!

Lip Service will only get you so far. After a while, if you don’t do the required steps, you are gonna be back in that fight for round two (or ten). And no one wants that!

Want to create better communication in your relationship? Grab a spot in my free Masterclass – How to Communicate: Relationship Edition!

Did you love this article? Get more delivered to your inbox!

More on the blog…

Check out my online seminar: Three Ingredients for a Great Relationship. Start connecting the dots and create the relationship you’ve always dreamed of!